You’re probably wondering, what the hell is Wyrd Blood? Wyrd Blood is what happens when I feel like I’m not scratching my world-building itch : ) Don’t worry, Ollie #3 is still coming!

Now, back to Wyrd Blood. What the hell is this new book/series about? Well, by now you all know how I enjoy wrecking worlds so it’s a combination of dystopian and epic fantasy. Of course you’ve also got some romance brewing as well because it can’t all be about destruction. The feedback I’ve gotten so far is that most of the readers who liked The Wilds will enjoy this as well.

If that isn’t enough to get your interest, I’m adding a first glimpse below : ) 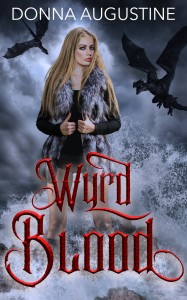 Brief History of the World

In 1620 BC (Before the Change), magic sprang into existence. No one knew why or how this occurred, as there had never been magic in the world before. Some speculated that it was because of the dual eclipse of the moons. Others said it was because the planet shifted on its axis. But no one had any logical theories on why some people were gifted with magic, and others were not. Or why magic would skip several generations. The only thing that was brutally obvious to all was that magic was power and this was the beginning of a new world.

By 391 AC (After the Change), people gifted with magic had taken control of every country in the land. The power structure had shifted and righted itself to this magical reign and a new normal had taken shape. The Wyrd Blood, as those with magic in their veins were sometimes called, were hoarded as commodities by their stronger brethren. They were kept in gilded cages, bred for more magic, more power.

But even as people found their footing in this new world, no one realized what world they’d be soon living in once the Magical War of 810 began. Because those with the thirst for power are seldom satisfied until they have it all.

Ryker stood leaning beside the open door, his face silhouetted by the full moon shining behind him. I didn’t need to see his eyes to feel the burn of their stare. The same night breeze that ruffled his dark hair caressed my skin, taunting me with a hint of freedom. It was a stark contrast to the cold stone wall at my back, as I sat in the windowless room.

The world unfolded ten feet away, yet I didn’t have any hope of reaching it because of one wrong decision. Wasn’t that the way of it, though? A single misstep and everything crumbled around you. Safety, permanency, they were the grand illusions we all tried to partake in. Eventually, though, the truth would shine its harsh light on our endless vulnerabilities. That was when the true survivors stood, while the weak crawled into the shadows.

I wouldn’t be among the weak. I forced the fear down, into a dark pit within, as I had so many times before in my life. The regrets were harder to swallow back, but I did, knowing he was searching for weakness. I wouldn’t give this man a crumb. He already had too much power, and I wouldn’t take part in any illusion of my defeat. I wasn’t finished yet, not by a magic mile.

He crossed his arms in front of his chest, his white shirt pulled tight over broad shoulders as he made himself more comfortable. I sat stiff as a board, afraid to reveal anything while we sized each other up in the darkened silence.

“How many days are you going to sit here?” He raised his hand, mocking me as he made a show of counting his fingers. “Going to need the second hand soon.”

I didn’t laugh at his crude joke. Didn’t scowl, either. I’d figure a way out of this mess, and then we’d see who was gloating.

He didn’t like me. I didn’t like him either, so at least in that, we were on an even playing field.

His hand dropped. “You must realize this is a waste of time.”

His tone was that of a person who thought they had all the control. I said nothing, as I had for the last four nights he’d come, my insides charring from restrained anger.

He turned his head, his hawkish profile partially revealed in moonlight. He smiled, and it added a chill to the already cold room.

“What if I tire of this game and kill you? Aren’t you afraid to die?”

I was already dying. Probably that much quicker, too, in this hole. I quickly blocked the thought as his magic reached out. I tried my best to keep up my defenses as his magic swirled in the air and filled the room, testing me, surrounding me, trying to find my weaknesses as it attempted to lure me into letting down my defenses.

He might beat me eventually. He was strong, stronger than anyone I’d ever met. But if this was my time to cross the Styx into the forever night, I was going with a fight.

I’d die here if need be. That was the craziest part of knowing you were dying. It trimmed off all the should-haves and cut you right down to your essence. It was a gift of freedom, cursed with a lack of time. It made you think back to everything you’d done, every decision, every word, and see it in that harsh light. Some actions shone and some cast a dark shadow on your timeline.

He crossed his arms in front of him, his forearms rippling. “You’re going to give me what I want.”

I shrugged, a silent Think whatever you want. Time will tell.

I tilted my head back, looking at the ceiling. “Are we finished for tonight?”

He let out a short laugh that, unlike the smile, sounded genuine. “I’ll leave you to your amusements until tomorrow.”

He walked out and shut the door to the empty room while I shined that harsh light back over the last week of my life, and the regrets flooded back to the surface.

Check it out on Amazon